In the SUV world, you have a couple sub-categories of “sport” utility vehicles.

You have the soft ‘utes – the small yet pumped up versions of cars. They provide mostly city-like handling for urban dwellers that want a little extra space and a commanding driving position.

At the other end of the spectrum you have the big, brash SUVs. Think of the Toyota Highlander or even the Cadillac Escalade. All utility and sport only by name.

In between is a segment that’s getting squeezed. You have these SUVs that are as legitimate at what they do as Jason Statham is at being an action hero. They’re doing their best to be utilitarian and athletic.

This is where the Ford Edge Sport slots in. The Edge, on its own, is not bad. But the Sport makes you proud to drive a big vehicle.

My tester is a bright orange model – the colour is known officially as “Spice.” It stands out on your driveway or in any parking lot largely due to the bright, high-energy hue that it’s painted.

But it also stands out for its sport poise. The sheet metal is muscular. Bulges hint at inner power.

Looking out from behind the driver’s seat, the bulges on the hood are so big it looks like something is wrong with the hood. It’s like the SUV was in a crash and the metal was shifted out-of-place to expose openings between where the hood meets the windshield wipers and the glass.

Don’t worry, you’ll get over the bulging hood in a couple of days.

Inside, things are not bad. It’s no luxury barge, so don’t expect to get pampered by soft, plush materials or high-quality lux finishes. Things are as you’d expect in a Ford, and the build quality does feel quite good.

When it comes to storage space, there are lots of spots. You’ll find several spots to stash everything from your phone to your wallet to your clutch. Whether it’s under the armrest or in the middle of the dash, the Edge has you covered.

Speaking of space, you’ll have more than enough to stretch out. The front row provides ample room for the driver and passenger, while the back row is airy. Yes, there’s no third row – but you’d be looking at the Explorer if you need the extra seating.

And because there’s no third row, trunk space is fantastic. I could point out how many litres of cargo capacity the Edge affords, but just know that you can fit in a stroller, gear for a family of three and a guitar. You could easily fit in another occupant and their stuff for a weekend trip.

So, we’ve determined that the Edge Sport looks unforgettable, it can swallow up a family of four and their stuff. But how does it get from point A to point B?

There’s no hiding the girth of the Edge. It’s big. But if you want to haul around friends or a family and their belongings, you need size.

On city streets, the Edge rolls along but you need to give it a little extra space to do its thing.

Having the Adaptive Cruise Control for a jaunt up to the cottage made the journey even more enjoyable. The Edge did well to adapt its speed to the changing traffic conditions.

The Edge Sport packs a 2.7-litre V6 engine under the bulging hood. It’s good for 315 horsepower and 350 lb-ft. of torque. I’d have to say I expected more power from the “Sport” edition, but this Edge felt like it had a sufficient amount of power to haul ass.

Fuel economy was quite dependent on how you drive. If you take advantage of the Sport moniker, you’re going to be in the mid double-digits L/100 km. I was scoring between 16-17 during city driving.

How could I forget connectivity/infotainment and leave it to the end? Simply put – Sync3 is quite good. If an infotainment system leaves me with a bad taste, it’s one of the first things I’d mention. But here, in the Edge, it was quite solid. It accepted pretty much all voice commands with ease and the interface itself responded quickly. Sure, the interface could look better, but everything is going to get outdated in no time. So what?

Which leaves this at the price.

The 2016 Ford Edge Sport starts at $46,099. My tester had voice-activated navigation and a gorgeous panoramic sun roof ($2,000) while the adaptive cruise control and collision warning system added $1,500. Tag on another $5,500 for a plethora of visual and convenience features and we’re looking at a price as tested as $56,839.

If you’re shopping and up against Korean competitors, that might seem like a lot. But hey, there’s no other SUV in this market that looks as badass as the Edge Sport – along with the space to put the “utility” in Sport Utility Vehicle. 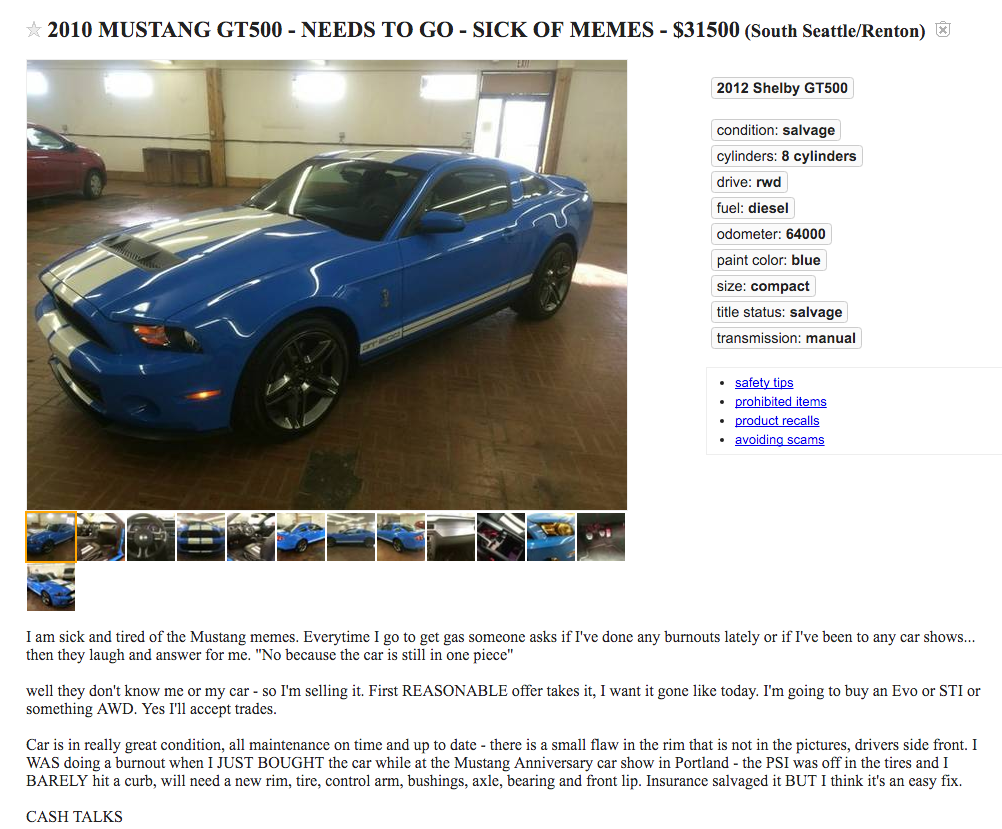 A Ford Mustang owner who seems to be sick of all the memes making fun of the muscle car has had enough and decided to sell his hot rod.

A Craigslist user in the Seattle area appears to be selling his ‘Stang because of all the unwanted attention he’s getting following a week of memes making fun of Mustang drivers.

In the listing, the owner says:

“I am sick and tired of the Mustang memes. Every time I go to get gas someone asks if I’ve done any burnouts lately or if I’ve been to any car shows… then they laugh and answer for me. ‘No because the car is still in one piece'”

In case you’ve missed any of the memes, here’s a YouTube video showing a Mustang leaving a car enthusiast event in Chicago. The Ford pulls out onto the main street and then shortly crashes.