The Jaguar F-Type is one of the best-sounding sports cars on the market. But the cabin has room for improvement, and you might want to think twice about the value of this $90,000 car. 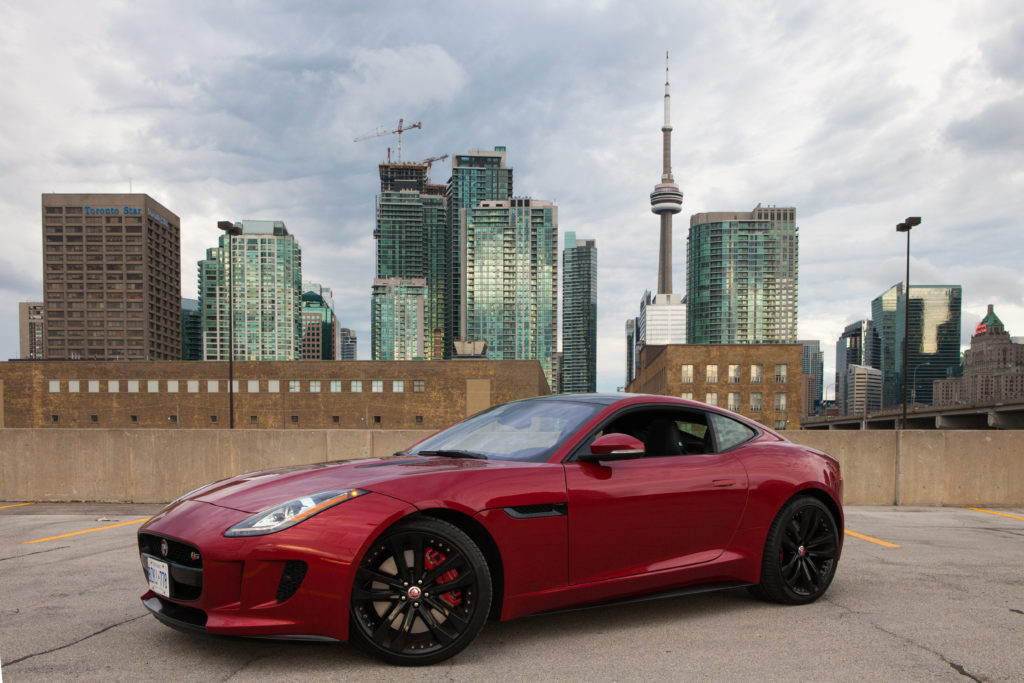 The Jaguar F-Type is one of the best-sounding sports cars on the market. But the cabin has room for improvement, and you might want to think twice about the value of this $90,000 car.

With the he 2017 Jaguar F-Type, you slip into the driver’s seat rather than step or climb in. As far as the cabin feelings go, this one is like a cozy blanket.

The interior feels posh, insulated and comfortable. Most surfaces feel well-made and suitable for the type of car that costs almost a hundred grand.

Granted, the dashboard layout is horrible. The infotainment system is slow and dated. The shifter blocks access to key infotainment controls (but you can use the steering wheel-mounted buttons instead).

Meanwhile, the centre stack swoops around your right leg and continues on past your right elbow, through your shoulder and to the back of the coupe.

The way the cockpit surrounds you is a testament to how this is a car for people who like to drive. But does it deliver a “driver’s” car?

The specific car I reviewed was a 3.0-litre V6-powered S model, which produces 380 horses from the supercharged engine.

Before you even hit the gas pedal, just from turning this engine on with the starter button, your ears are feasted to a glorious soundtrack.

Honestly, if you enjoy listening to music while you drive, great. But this car doesn’t need any more music. The exhaust note sounds good enough.

In fact it’s so good, kids on my street turn their heads to take a look before it even passes their view. My wife can even hear me coming home from a few hundred metres away.

No, it’s not Mustang-aftermarket-exhaust loud. Nor is it that cheesy. It just sounds deep, throaty and solid.

Performance-wise, the engine is not bad. You’d kinda expect this car to fly, which it does. It’s just that the vehicle itself is a little heavy so the feeling of acceleration didn’t really come through to the driver.

Sure, you put your foot down and hear the baritone notes from the engine, the speedometer shoots up, and next thing you know you’re lifting off the pedal so that you don’t get a massive ticket.

However, the sensation of speed is muted within the cabin. Personally, I like to feel that I’m flying.

It’s not like there’s space to take advantage of that speed in Toronto. In fact, I never got above third gear one time driving from Mississauga to midtown Toronto along the 401 during rush hour.

The brakes were fantastic, erasing speed with ease. The suspension was taunt, but not so hard that you’d need to see a chiropractor on a weekly basis.

It was all very civilized and very orderly. Unless you kick the accelerator as your turning.

See, this Jag is a rear-wheel drive model (you can get it with all-wheel drive too). But sending all that supercharged power to the rear wheels can result in a bit of oversteer. And next thing you know you’re fighting with the wheel to keep things going straight.

This aspect of the F-Type will definitely keep you on your toes. But it’s also a feature that will keep you excited, it won’t let you get complacent and it’ll deliver exactly what a sports car is meant to deliver – an experience above and beyond a normal sedan.

In the looks department, the F-Type nails it. I’ve never had so much interest in a car like this one.

It was particularly from the kids, tugging at their dad’s shirts or slapping their friends on the shoulder to check out this car. It just looks eyecatching even when your left leg is getting a workout with the clutch in rush hour traffic.

Downsides? It’s a two-door car, and the doors seem particularly long. That makes getting in and out of the car in thin spaces a little more challenging.

The trunk is for slim luggage, even though there’s no rear seat (this is strictly for two).

The audio system wasn’t amazing, which you’d expect better in a tester that was $106,725. The sound was at time distorted, particularly when it wasn’t turned up. Either a previous reviewer blew the speakers, or the speakers are cheap. I hope it was the former and not the latter.

And you know what, the HVAC vents that raise from the dashboard makes up for any shortcomings.

As does the exhaust note. Did I mention that?

In the SUV world, you have a couple sub-categories of “sport” utility vehicles.

You have the soft ‘utes – the small yet pumped up versions of cars. They provide mostly city-like handling for urban dwellers that want a little extra space and a commanding driving position.

At the other end of the spectrum you have the big, brash SUVs. Think of the Toyota Highlander or even the Cadillac Escalade. All utility and sport only by name.

In between is a segment that’s getting squeezed. You have these SUVs that are as legitimate at what they do as Jason Statham is at being an action hero. They’re doing their best to be utilitarian and athletic.

This is where the Ford Edge Sport slots in. The Edge, on its own, is not bad. But the Sport makes you proud to drive a big vehicle.

My tester is a bright orange model – the colour is known officially as “Spice.” It stands out on your driveway or in any parking lot largely due to the bright, high-energy hue that it’s painted.

But it also stands out for its sport poise. The sheet metal is muscular. Bulges hint at inner power.

Looking out from behind the driver’s seat, the bulges on the hood are so big it looks like something is wrong with the hood. It’s like the SUV was in a crash and the metal was shifted out-of-place to expose openings between where the hood meets the windshield wipers and the glass.

Don’t worry, you’ll get over the bulging hood in a couple of days.

Inside, things are not bad. It’s no luxury barge, so don’t expect to get pampered by soft, plush materials or high-quality lux finishes. Things are as you’d expect in a Ford, and the build quality does feel quite good.

When it comes to storage space, there are lots of spots. You’ll find several spots to stash everything from your phone to your wallet to your clutch. Whether it’s under the armrest or in the middle of the dash, the Edge has you covered.

Speaking of space, you’ll have more than enough to stretch out. The front row provides ample room for the driver and passenger, while the back row is airy. Yes, there’s no third row – but you’d be looking at the Explorer if you need the extra seating.

And because there’s no third row, trunk space is fantastic. I could point out how many litres of cargo capacity the Edge affords, but just know that you can fit in a stroller, gear for a family of three and a guitar. You could easily fit in another occupant and their stuff for a weekend trip.

So, we’ve determined that the Edge Sport looks unforgettable, it can swallow up a family of four and their stuff. But how does it get from point A to point B?

There’s no hiding the girth of the Edge. It’s big. But if you want to haul around friends or a family and their belongings, you need size.

On city streets, the Edge rolls along but you need to give it a little extra space to do its thing.

Having the Adaptive Cruise Control for a jaunt up to the cottage made the journey even more enjoyable. The Edge did well to adapt its speed to the changing traffic conditions.

The Edge Sport packs a 2.7-litre V6 engine under the bulging hood. It’s good for 315 horsepower and 350 lb-ft. of torque. I’d have to say I expected more power from the “Sport” edition, but this Edge felt like it had a sufficient amount of power to haul ass.

Fuel economy was quite dependent on how you drive. If you take advantage of the Sport moniker, you’re going to be in the mid double-digits L/100 km. I was scoring between 16-17 during city driving.

How could I forget connectivity/infotainment and leave it to the end? Simply put – Sync3 is quite good. If an infotainment system leaves me with a bad taste, it’s one of the first things I’d mention. But here, in the Edge, it was quite solid. It accepted pretty much all voice commands with ease and the interface itself responded quickly. Sure, the interface could look better, but everything is going to get outdated in no time. So what?

Which leaves this at the price.

The 2016 Ford Edge Sport starts at $46,099. My tester had voice-activated navigation and a gorgeous panoramic sun roof ($2,000) while the adaptive cruise control and collision warning system added $1,500. Tag on another $5,500 for a plethora of visual and convenience features and we’re looking at a price as tested as $56,839.

If you’re shopping and up against Korean competitors, that might seem like a lot. But hey, there’s no other SUV in this market that looks as badass as the Edge Sport – along with the space to put the “utility” in Sport Utility Vehicle.